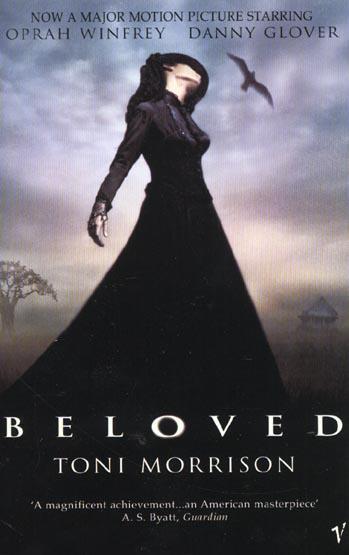 124 WAS SPITEFUL. Full of a baby's venom. The women in the house knew it and so did the children. For years each put up with the spite in his own way, but by 1873 Sethe and her daughter Denver were its only victims. The grandmother, Baby Suggs, was dead, and the sons, Howard and Buglar, had run away by the time they were thirteen years old--as soon as merely looking in a mirror shattered it (that was the signal for Buglar); as soon as two tiny band prints appeared in the cake (that was it for Howard). Neither boy waited to see more; another kettleful of chickpeas smoking in a heap on the floor; soda crackers crumbled and strewn in a line next to the doorsill. Nor did they wait for one of the relief periods: the weeks, months even, when nothing was disturbed. No. Each one fled at once--the moment the house committed what was for him the one insult not to be borne or witnessed a second time. Within two months, in the dead of winter, leaving their grandmother, Baby Suggs; Sethe, their mother; and their little sister, Denver, all by themselves in the gray and white house on Bluestone Road. It didn't have a number then, because Cincinnati didn't stretch that far. In fact, Ohio had been calling itself a state only seventy years when first one brother and then the next stuffed quilt packing into his hat, snatched up his shoes, and crept away from the lively spite the house felt for them.

Baby Suggs didn't even raise her head. From her sickbed she heard them go but that wasn't the reason she lay still. It was a wonder to her that her grandsons had taken so long to realize that every house wasn't like the one on Bluestone Road. Suspended between the nastiness of life and the meanness of the dead, she couldn't get interested in leaving life or living it, let alone the fright of two creeping-off boys. Her past had been like her present--intolerable--and since she knew death was anything but forgetfulness, she used the little energy left her for pondering color.

"Bring a little lavender in, if you got any. Pink, if you don't."

And Sethe would oblige her with anything from fabric to her own tongue. Winter in Ohio was especially rough if you had an appetite for color. Sky provided the only drama, and counting on a Cincinnati horizon for life's principal joy was reckless indeed. So Sethe and the girl Denver did what they could, and what the house permitted, for her. Together they waged a perfunctory battle against the outrageous behavior of that place; against turned-over slop jars, smacks on the behind, and gusts of sour air. For they understood the source of the outrage as well as they knew the source of light.

Baby Suggs died shortly after the brothers left, with no interest whatsoever in their leave-taking or hers, and right afterward Sethe and Denver decided to end the persecution by calling forth the ghost that tried them so. Perhaps a conversation, they thought, an exchange of views or something would help. So they held hands and said, "Come on. Come on. You may as well just come on."

The sideboard took a step forward but nothing else did.

"Grandma Baby must be stopping it," said Denver. She was ten and still mad at Baby Suggs for dying.

Sethe opened her eyes. "I doubt that," she said.

"Maybe. But if she'd only come, I could make it clear to her." Sethe released her daughter's hand and together they pushed the sideboard back against the wall. Outside a driver whipped his horse into the gallop local people felt necessary when they passed 124.

"For a baby she throws a powerful spell," said Denver.

"No more powerful than the way I loved her," Sethe answered and there it was again. The welcoming cool of unchiseled headstones; the one she selected to lean against on tiptoe, her knees wide open as any grave. Pink as a fingernail it was, and sprinkled with glittering chips. Ten minutes, he said. You got ten minutes I'll do it for free.

Ten minutes for seven letters. With another ten could she have gotten "Dearly" too? She had not thought to ask him and it bothered her still that it might have been possible--that for twenty minutes, a half hour, say, she could have had the whole thing, every word she heard the preacher say at the funeral (and all there was to say, surely) engraved on her baby's headstone: Dearly Beloved. But what she got, settled for, was the one word that mattered. She thought it would be enough, rutting among the headstones with the engraver, his young son looking on, the anger in his face so old; the appetite in it quite new. That should certainly be enough. Enough to answer one more preacher, one more abolitionist and a town full of disgust.

Counting on the stillness of her own soul, she had forgotten the other one: the soul of her baby girl. Who would have thought that a little old baby could harbor so much rage? Rutting among the stones under the eyes of the engraver's son was not enough. Not only did she have to live out her years in a house palsied by the baby's fury at having its throat cut, but those ten minutes she spent pressed up against dawn-colored stone studded with star chips, her knees wide open as the grave, were longer than life, more alive, more pulsating than the baby blood that soaked her fingers like oil.

"We could move," she suggested once to her mother-in-law.

"What'd be the point?" asked Baby Suggs. "Not a house in the country ain't packed to its rafters with some dead Negro's grief. We lucky this ghost is a baby. My husband's spirit was to come back in here? or yours? Don't talk to me. You lucky. You got three left. Three pulling at your skirts and just one raising hell from the other side. Be thankful, why don't you? I had eight. Every one of them gone away from me. Four taken, four chased, and all, I expect, worrying somebody's house into evil." Baby Suggs rubbed her eyebrows. "My firstborn. All I can remember of her is how she loved the burned bottom of bread. Can you beat that? Eight children and that's all I remember."

"That's all you let yourself remember," Sethe had told her, but she was down to one herself--one alive, that is--the boys chased off by the dead one, and her memory of Buglar was fading fast. Howard at least had a head shape nobody could forget. As for the rest, she worked hard to remember as close to nothing as was safe. Unfortunately her brain was devious. She might be hurrying across a field, running practically, to get to the pump quickly and rinse the chamomile sap from her legs. Nothing else would be in her mind. The picture of the men coming to nurse her was as lifeless as the nerves in her back where the skin buckled like a washboard. Nor was there the faintest scent of ink or the cherry gum and oak bark from which it was made. Nothing. Just the breeze cooling her face as she rushed toward water. And then sopping the chamomile away with pump water and rags, her mind fixed on getting every last bit of sap off--on her carelessness in taking a shortcut across the field just to save a half mile, and not noticing how high the weeds had grown until the itching was all the way to her knees. Then something. The plash of water, the sight of her shoes and stockings awry on the path where she had flung them; or Here Boy lapping in the puddle near her feet, and suddenly there was Sweet Home rolling, rolling, rolling out before her eyes, and although there was not a leaf on that farm that did not make her want to scream, it rolled itself out before her in shameless beauty. It never looked as terrible as it was and it made her wonder if hell was a pretty place too. Fire and brimstone all right, but hidden in lacy groves. Boys hanging from the most beautiful sycamores in the world. It shamed her--remembering the wonderful soughing trees rather than the boys. Try as she might to make it otherwise, the sycamores beat out the children every time and she could not forgive her memory for that.

When the last of the chamomile was gone, she went around to the front of the house, collecting her shoes and stockings on the way. As if to punish her further for her terrible memory, sitting on the porch not forty feet away was Paul D, the last of the Sweet Home men. And although she could never mistake his face for another's, she said, "Is that you?"

"What's left." He stood up and smiled. "How you been, girl, besides barefoot?"

When she laughed it came out loose and young. "Messed up my legs back yonder. Chamomile."

He made a face as though tasting a teaspoon of something bitter. "I don't want to even hear 'bout it. Always did hate that stuff."

Sethe balled up her stockings and jammed them into her pocket. "Come on in."

"Porch is fine, Sethe. Cool out here." He sat back down and looked at the meadow on the other side of the road, knowing the eagerness he felt would be in his eyes.

"Eighteen," he repeated. "And I swear I been walking every one of em. Mind if I join you?" He nodded toward her feet and began unlacing his shoes.

"You want to soak them? Let me get you a basin of water." She moved closer to him to enter the house.

"No, uh uh. Can't baby feet. A whole lot more tramping they got to do yet."

"You can't leave right away, Paul D. You got to stay awhile."

"Well, long enough to see Baby Suggs, anyway. Where is she?"